In the third Notre Dame Forum event of fall 2018, Rowan Williams, renowned theologian and former archbishop of Canterbury, spoke Monday (Nov. 26) to a capacity crowd in the Dahnke Ballroom at the University of Notre Dame.

In his introduction of Williams, Notre Dame President Rev. John I. Jenkins, C.S.C., said, “Throughout his career, Williams has been that rare theologian who can speak effectively to the academy, to the Church and the larger public.”

Williams’ lecture, “‘Relieved by Prayer’: Power, Shame and Redemption in Shakespeare’s Drama,” invited attendees to consider the closing words of “The Tempest,” spoken by Prospero, in the final dramatic speech of William Shakespeare’s canon:

“And my ending is despair,
Unless I be relieved by prayer,
Which pierces so that it assaults
Mercy itself and frees all faults.
As you from crimes would pardon’d be,
Let your indulgence set me free.”

Williams noted that one of the features of Shakespeare’s plays is how he “will allow his plays to talk to each other — a theme is explored, staged, dropped, rediscovered, re-staged.” 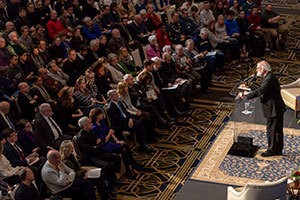 With an eye toward understanding “Prospero’s strange and enigmatic farewell at the end of ‘The Tempest,’” Williams’ lecture surveyed a succession of prayers in Shakespeare’s plays. He examined Henry V’s soliloquy prayer on the role of monarchs and the challenge of inherited fault; the prayer of Claudius in “Hamlet,” who attempts repentance without restitution; and the shame of Angelo in “Measure for Measure,” who cannot fathom living with a shattered image of himself, even after being pardoned by the duke. Williams noted that while Shakespeare’s characters in these instances appeal to grace, they seek to make that grace an instrument of control, thus frustrating their own efforts at reconciliation.

“In all of these instances, part of what is drawn out in Shakespeare’s dramas is the powerlessness that results from the search for power,” Williams said. “Deploy your utmost capacity for power to secure your position and you end up in hell, which is the ultimate powerlessness of the ego.”

Circling back to Prospero’s wish to be relieved by prayer, Williams likened “The Tempest’s” central character to a dramaturg — one who stages a process, constructing encounters, characters and relations, all designed to draw out buried truth. Prospero sets himself apart from these other Shakespearean characters, according to Williams, by his ability to step out from the role of dramatist.

“We hear (Prospero’s) renunciation, but he needs prayer from other people,” Williams said. “He needs the audience. He needs us to put our hands together at the end, not only to applaud, but also to pray. He needs gentle breath of yours, he needs Spirit and he needs us to breathe into his sails so that his journey may proceed.”

Williams shepherded the Church of England as Archbishop of Canterbury from 2002 to 2012. He is a leading figure in the study of religion and literature and currently serves as Master of Magdalene College at the University of Cambridge. He was elected a Fellow of the British Academy in 1990 and a Fellow of the Royal Society of Literature in 2003.

Educated in theology at both Cambridge and Oxford, Williams is the author of dozens of books and articles on Christian theology, belief, poetry and icons. His 2005 book, “Grace and Necessity: Reflections on Art and Love,” draws on the works of Catholic thinkers and artists like Jacques Maritain, Flannery O’Connor and David Jones to explore how human beings open themselves to transcendence. Williams is a noted poet and translator of poetry and, in addition to Welsh, speaks or reads nine other languages.

Since its establishment in 2005, the Notre Dame Forum has featured major talks by leading authorities on issues of importance to the University, the nation and the larger world, including the challenges and opportunities of globalization, the role of presidential debates, immigration, sustainability and the place of faith in a pluralistic society. The 2018-19 Notre Dame Forum is themed “The Catholic Artistic Heritage: Bringing Forth Treasures New and Old.”